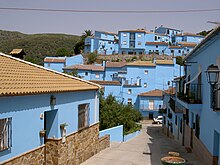 Júzcar is a village in the province of Málaga, in the southern part of Spain.

The village used to be one of the famous “white villages of Andalusia”, with traditionally white painted buildings.

In the spring of 2011, all buildings (including the church and the head stones at the graveyard) were painted in the “Smurfs-blue” color. This was done by Sony Pictures to celebrate the premiere of the Smurfs movie in cinemas around the world. In total, an amazing 4000 liters of blue paint was used.

In december 2011, Sony offered to paint the village back to its original white color, but the inhabitants decided to vote if they actually wanted that. It was decided in the end to leave the buildings blue, because after the paint job,  80.000 tourists came to the village to see the Smurfs houses…

Where do you want to go?